When we left Ninigo, we had westerly winds and felt exhilarated. This aura quickly dissipated as Carina pushed against unrelenting west-setting currents with often little wind. These currents, often mixed, kick up short steep waves at short intervals, which can create a sharp and twisting motion to the hull. AND, flog whatever little bit of wind there might be out of the sails.

Getting to Kapingamarangi proved almost impossible to get to with our range of motoring under such conditions. Too, our supplies are starting to get low, even with the influx of crayfish, snake beans and PUMPKIN (!) at Ninigo. So we reluctantly turned our focus to Pohnpei.

Occasionally, with squally periods, we have had westerlies again (truly a blessing) but otherwise we've continued to push push push slowly east and north against wind and current. The squalls - we were thinking of writing a story called "Clouds I Have Known" - have been of every size and intensity but all are intimidating (and some downright scary) and can whomp you down hard if you dare to mess with them. Thus, we are usually running a reefed main which limits our drive. Thank goodness for roller reefing headsails!

For encounters we've had a few Asian fishing boats fishing the upwellings along the Mussau Trench that don't run AIS until - oops! - they suddenly see your AIS signal. One memorable evening, becalmed, an AIS signal of a drifting (presumptive) fishing boat showed up. The vessel's drift was towards us and we weren't moving well ourselves. A few minutes later ANOTHER AIS signal of a deep draft vessel showed up SW of us, and it was steaming directly towards the drifting boat - and us - at 11 knots! Slowly their statistics emerged and we collected information. The vessel "not under command" was the Royal Meredith, a "High Speed Craft" (?) and the steaming vessel was the Ocean Crystal, a tanker, that was going to be bunkering fuel to the Royal Meredith in almost exactly the spot we were becalmed. Grrrr! Of the millions of square miles of the NW Pacific, we find ourselves smack in the middle of a deep draft sandwich! Time to use some of our horded fuel!

Of our animal visitors, we've had the usual stupid boobies trying to land on the wind generator (ouch!) that have instead found, and fouled, the solar panels. Plus a whale, a tropic bird, scores of tuna that tease us by leaping nearby during the nastiest of conditions, and many dolphins. Dolphins brings us a sense of well-being, especially when they arrive at night and just swim along side for a bit. We get the sense they're saying, "Isn't this grand? This ocean. Relax. Enjoy."

One particularly stormy afternoon a couple of days back, we had a very large pod of green dolphins gleefully playing around Carina. Those on the fringes of the pod came speeding at us, leaping and breeching as they came. 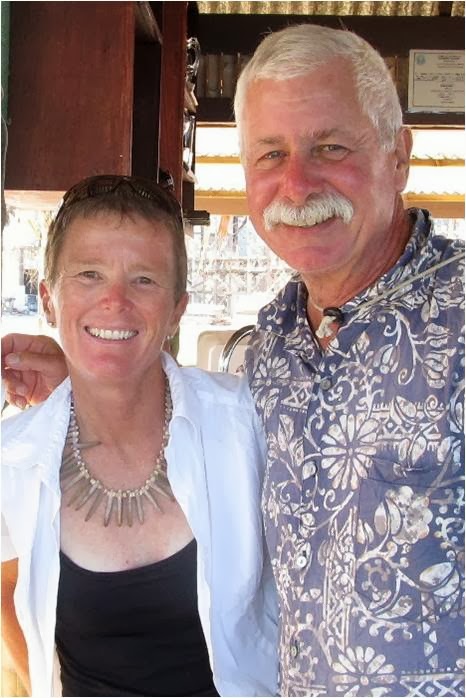